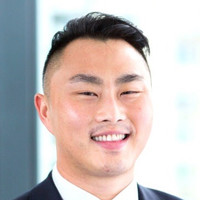 Reimen Hii, like so many lawyers, initially chose law because he got the grades to get in. Now a barrister, Reimen is driven by the intellectual stimulation the law offers, and draws a sense of purpose from being able to genuinely help people with their problems.

Giving the voiceless a voice
“A high school teacher suggested I consider studying law because it was a lot like history - full of interesting stories, and all about framing hypotheses and arguing points - which I enjoyed,” said Reimen. “I didn’t think at the time that I would go on to practice as a barrister of all things!”

As a student, he was inclined towards Humanities, but knew he didn’t want to become a doctor. Alongside law, Reimen undertook a Bachelor of Arts with a focus on languages.

“I love languages – the ability to communicate and connect with other people is something that I’ve always enjoyed,” said Reimen. “Practising law allows me to do that day-to-day, including giving marginalised, or voiceless people a chance to be heard, connected with, and to have their views considered.”

In September 2019, Reimen was recognised as Australian Young Lawyer of 2019 by the Law Council of Australia, reflecting his contributions through pro bono work, access to justice and diversity advocacy.

“I believe my involvement in industry organisations such as the Asian Australian Lawyers Association, LawRight and Caxton Legal Centre, and working with young lawyers and law students contributed to this award,” said Reimen. “None of this would be possible if I did not have the support and patience of my family, and a passionate group of colleagues, and friends in the law who believe that cultural and linguistic diversity, and access to justice are vital to making our society fairer, and a richer experience. I’m privileged to work with and learn from each of those people – they keep me energised when I feel overwhelmed or flat.”

“I was at that stage of my career where I was doing a lot of my own court advocacy,” said Reimen. “Sadly, I found there were a few young CALD (culturally and linguistically diverse) lawyers of Asian (East Asian, South Asian, and South-East Asian) descent in Brisbane working as Court advocates, and who were interested in promoting collegiality and visibility of CALD Australian lawyers.”

He wanted to create a forum for Asian Australian lawyers to socialise, network and support each other, particularly through difficult circumstances.

“One of the events that solidified my will to get involved in the AALA was when I faced prejudice going to Court, early on in my career - often indirect or subtle but always obvious - because of my cultural heritage and appearance. I didn’t want others to feel like that, or to have Asian Australians feel unable to do certain work because of ignorant or incorrect preconceptions”.

The AALA aims to increase CALD diversity, particularly in the upper echelons of the profession.

“I hadn’t seen or known of any Asian judges, QCs, or partners in large firms, and thought the AALA was a great opportunity to generate the conversations and momentum to change that,” he said.

He is particularly proud of the AALA’s joint cultural indigenous awareness training seminar held with the Indigenous Lawyers Association Queensland in 2018.

“It was the first of its kind to allow those working in the law to gain an insight into indigenous cultural diversity from a historical and social perspective. These insights could be used to improve their own practices and gain better outcomes for indigenous clients,” he said. “We plan to host more cultural awareness training covering a diverse range of cultures, in partnership with other Queensland based organisations such as the QLS.”

In less than a year, the AALA has grown from 3 to over 100 members and accomplished a great deal.

Other initiatives include a series of free CPD workshops on advocacy, cultural awareness, litigation skills, and diversity the AALA conducted for its members and the wider community.

Encouraging diversity
Reimen sees much potential in what the AALA can do to encourage diversity.

“I hope to be able to create opportunities for young lawyers and graduates, particularly those from a CALD background, to establish themselves and excel,” said Reimen. “In my experience, the legal profession is a collegiate one, so I’d like to help dispel any misconceptions that people may have about the profession and build trust amongst our profession, the Courts, and society at large.

“I’d also like to improve access to the justice system to create a fairer society that is just in the results that it delivers, accessible to the people who need it, responsive to their needs and properly resourced.

“I’d like to become someone who people can come to for sound guidance and assistance with the development of the law,” he said.

He thinks there is a strong business case for diversity in the legal profession.

For new lawyers, Reimen’s advice is simple: get involved with an organisation you are passionate about, that aligns with your values or interests. Stay connected with others you meet.

“There is no shortage of them,” he said. “Connect with other lawyers, both young and old. Put your hand up, and giving things a go (even if they’re new), no matter how shy or uncomfortable you might be.

“Not everyone needs to be involved in the front-line of advocating diversity in the law,” he said. “Even just being a conscientious lawyer, who is diligent, does good work and is passionate also encourages diversity. People are always watching you, whether you notice it or not, and you’ll dispel stereotypes, inspire or impact others through your day to day actions.”